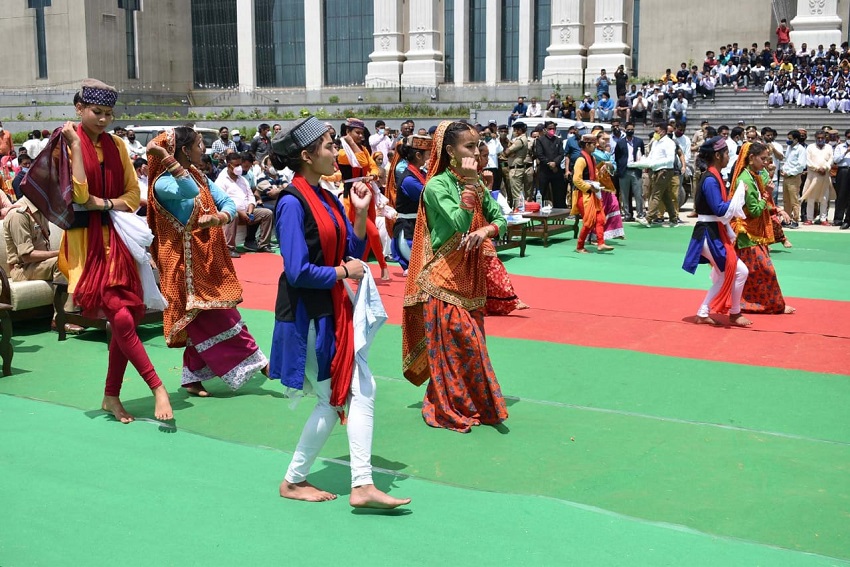 A colorful cultural program was presented by the students of Saraswati Vidya Mandir Gairsain on Independence Day.

Saluting the freedom fighters, the Chief Minister extended warm greetings and best wishes to the people of the state on Independence Day and Amrit Mahotsav of freedom. During this, he paid homage to the martyrs who made their invaluable sacrifices in the freedom struggle.

The Chief Minister said that our state is in its youthful stage today. The government is continuously working towards making the state of Uttarakhand a leading state in the whole country by taking forward the development plans at a fast pace. The announcements made by the government regarding development works are being fulfilled. He said that on the lines of Kedarnath, the master plan for Badrinath Dham is almost ready. Under the master plan, a separate division of the Public Works Department has been created here for the development works of Badrinath.

The Chief Minister said that self-employment schemes have been started for the youth of the state to become employers and all facilities are being provided to the youth under one umbrella for self-employment. Apart from this, work is also being done by the government to fill the vacant posts in the departments soon. Due to Kovid, one year relaxation in age limit has also been provided to the youth for government jobs.

The Chief Minister said that the economic activities of the state have also been affected due to Kovid-19. He said that 200 crore has been released through DBT as financial assistance to about 1.64 lakh people associated with these professions to promote tourism, transport, rafting business. For the health sector, the state government has given a package of 205 crores. He said that the state government is also working to connect the dependents of martyr soldiers with employment.

The Chief Minister said that the State Government is fully prepared to deal with the possible third wave of Kovid. He said that our target is to do 100% vaccination in the entire state in the next four months. Apart from this, full medical arrangements have been made in all health centers to deal with the third wave. On this occasion, the Chief Minister also honored the Corona Warriors with a citation and prizes to the school children for giving a spectacular presentation of cultural programs in the assembly premises during the last Independence Day.

Vidhan Sabha Speaker Prem Chand Agrawal while extending warm wishes to the people of the state on the occasion of Independence, saluted the martyrs who sacrificed their lives for the freedom of the country with pride and pride. Announced to give two thousand rupees to each girl student who presented colorful cultural programs on Independence Day in the Vidhan Sabha premises.