Skip to content
Home
Education
CM Dhami did the land worship of the campus of Vishwa Bharti University, the campus of 1.5 billion will be named Gitanjali 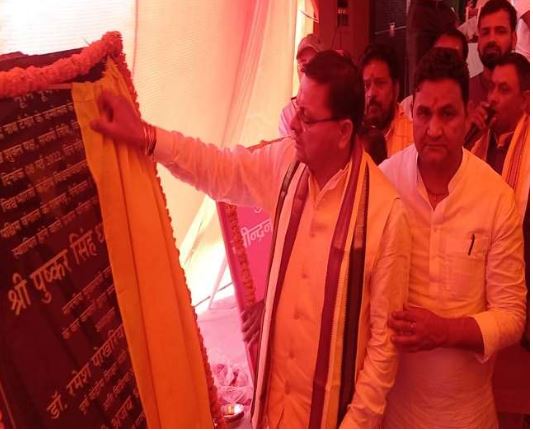 On the occasion of the 161st birth anniversary of Gurudev Rabindranath Tagore, CM Dhami performed Bhoomi Pujan of the first campus of the proposed Vishwa Bharati University at Tagore Top of Ramgarh. CM Dhami said that a DPR of 150 crores has been prepared and sent to the Central Government for the university campus to be built on 46 acres of land, which is in the process of getting approval. CM Dhami said that the complex will be named after Gurudev’s creation Gitanjali.

Shantiniketan Trust for Himalaya organized:
The program was organized by Shantiniketan Trust for Himalaya on the occasion of 161st birth anniversary of Gurudev Rabindranath Tagore on Sunday. Chief Minister Pushkar Singh Dhami was the chief guest in the program. He started the program by lighting the lamp along with his wife. On the other hand, Trust President Devendra Dhela and former Foreign Secretary Shashank welcomed the Chief Minister and his wife with a bouquet and a shawl.
Gurudev wrote some excerpts from Gitanjali here:
The Chief Minister said that Gurudev Rabindra Nath Tagore was inspired to establish Vishwa Bharati University in Ramgarh itself. In 1921 he founded Visva Bharati University. Gurudev wrote some excerpts of Gitanjali here in his Sheeshmahal located at Tagore Top. Today the campus of Visva-Bharati is going to be built on the same land. Which is a matter of pride. He said that the problem faced by the Uttarakhand government in allotment for setting up the university was removed. He is fortunate that he got the opportunity to perform Bhoomi Pujan of the University Campus.

Gurudev lit the flame of nationalism:
CM Dhami said that a wonderful stream of knowledge and yoga started at Tagore Top where Gurudev used to live. Which lit the flame of nationalism in the national freedom movement ranging from literature, music, art, science, theatrical science, story, poetry. He said that the importance of the National Education Policy, which is being implemented under the leadership of Prime Minister Narendra Modi, based on ancient Gurukul tradition, can be understood from the creation made by Gurudev on this land many years ago.
World tradition apart from Macaulay model

Gurudev started a world-class tradition apart from the Macaulay model in the form of Shantiniketan in the company of nature. Where classes were held in the open sky under trees. This has been the land of the best scholars. Gurudev spent his whole life in a mud hut. Therefore, this complex will also be developed in the form of Pahari style of architecture. Here courses like agriculture, forestry, innovation, local music, art, literature, local folk science, etc. will be run. CM Dhami announced to name this complex as Gitanjali, the creation of Gurudev.
Present during the program