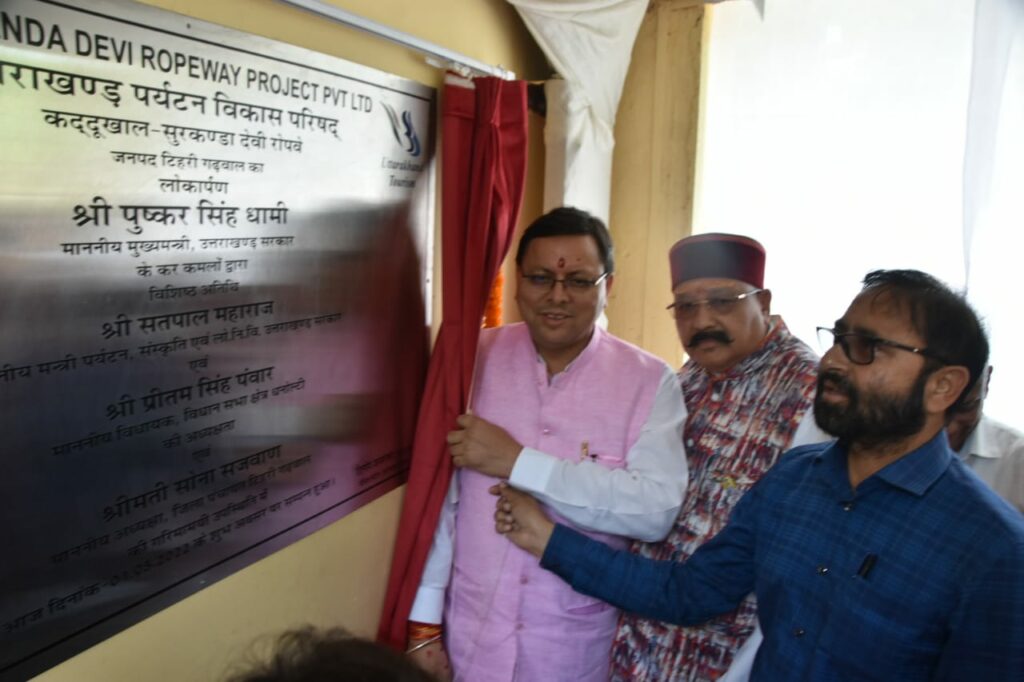 Worshiped and prayed for the state’s happiness and prosperity in the Devi temple. The Chief Minister directed the District Magistrate Tehri to identify land for the construction of a permanent helipad in this area.
The length of the ropeway built at a cost of about 05 crores to reach the Surkanda Devi temple is 502 meters. Its capacity is about 500 persons per hour. Surkanda Devi Temple Ropeway Service is the first important ropeway project after the formation of the state of Uttarakhand, which has been constructed by the State Tourism Department. With the start of Surkanda Ropeway service, devotees will be able to easily have darshan of Mother Surkanda Devi throughout the year in just 5 to 10 minutes from Kaddukhal.

Chief Minister Pushkar Singh Dhami said that with the start of ropeway service for Goddess Surkanda Devi, it would be easy for the devotees to have darshan. This will also increase the livelihood of the people at the local level. Along with religious tourism, adventure tourism is also being promoted in the state. The Chief Minister said that the ropeway project is a major means of pollution free transport for the commuters and tourists. Action is being taken by the state government for the construction of various ropeway projects in the districts under the Parvatmala scheme of the Centre. Various adventure water sports are being conducted in the giant lake spread over 42 square kilometers in Tehri district. Other activities related to tourism are being planned in this lake.

The Chief Minister said that under the guidance of the Prime Minister, development works are being done at a rapid pace in all the areas of the state. In 2025, when we celebrate the silver jubilee of the establishment of the state of Uttarakhand, Uttarakhand will be among the leading states of the country in this area. Lakhs of devotees are expected to visit Chardham Yatra this year. Every effort has been made to ensure that the devotees get every facility in the state.

Tourism Minister Satpal Maharaj said that with the start of ropeway service for Maa Surkanda, there will be a rapid increase in the number of devotees here. Efforts are being made to provide all possible facilities for the devotees in view of Chardham Yatra. Religious and adventure tourism is also being promoted in other areas of the state.