Chief Minister Shri Pushkar Singh Dhami inaugurated the COVID-19 Vaccination Camp at Government Primary School, Rajiv Nagar. The Chief Minister said that the world’s largest vaccination campaign is going on in India under the leadership of Prime Minister Shri Narendra Modi. In Uttarakhand, 100% vaccination will be done within four months. Complete vaccination has been done in Bageshwar and Rudraprayag districts. The Chief Minister thanked the Prime Minister for providing vaccines to Uttarakhand as per the requirement. He said that not only indigenous vaccine of Kovid was made in the country, we have also made it available to other countries in the spirit of world welfare. India has made an important place in the world under the leadership of the Prime Minister. 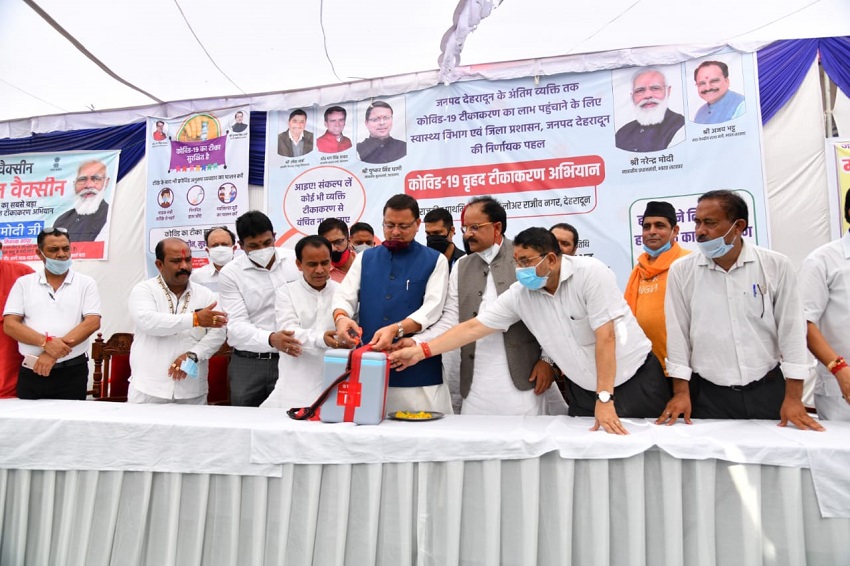 The Chief Minister said that our sentiment is that of a safe Uttarakhand and a healthy Uttarakhand. Efforts are being made to get everyone vaccinated against Kovid as soon as possible. 207 types of health check-ups are being done free of cost in the state. With this, even the poorest of the poor will be able to get their health check-up done for free.
Union Minister Shri Ajay Bhatt said that India has the highest number of COVID vaccinations in the world. Many schemes have been brought in the public interest under the leadership of the young Chief Minister. With the speed and tenacity with which work is being done in Uttarakhand, the work of the person standing in the last row is also being done.


State Health Minister Dr Dhan Singh Rawat said that today in Dehradun district, a record 1 lakh vaccines will be administered in a day. In the month of August, one lakh vaccine will be made available to Raipur assembly constituency.

MLA Umesh Sharma Kau while thanking everyone said that under the leadership of Chief Minister Pushkar Singh Dhami, rapid development works are being done in the state as well as in Raipur assembly constituency.