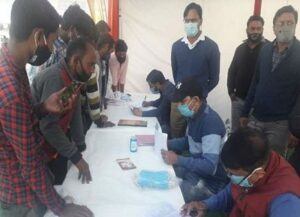 A two-day loan fair was organized in the municipal corporation on Wednesday. Representatives of 16 banks attended the fair. There were 106 ferries whose applications were pending under the scheme, while 96 new applications came. The loan is being made available after checking the documents by the banks.

This scheme has been brought by the government for the ferries who are facing financial crisis due to Corona. In which they are being provided a loan of ten thousand rupees at a very low monthly installment. The two-day loan fair in the corporation was inaugurated by Municipal Commissioner Vinay Shankar Pandey on Wednesday. Along with this, he instructed the corporation officials, including the representatives of banks, that such efforts should be made to get the benefit of the fair to more and more applicants. The city commissioner instructed the ferries to give information about the loan fair through telephone also. During this period, loan of 30 out of 45 applications was approved by State Bank. Also, Bank of Baroda sanctioned loans for 27 out of 38, while five cases were transferred to Vikasnagar body due to it.