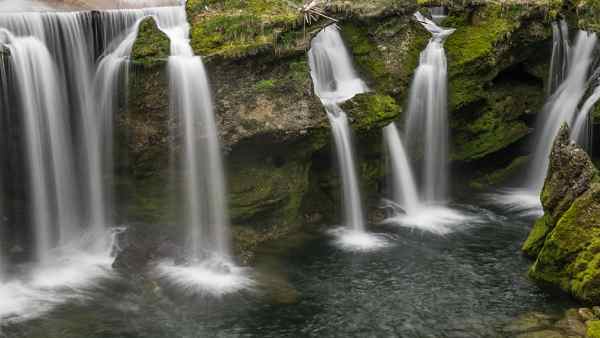 Waterfall should not be confused with the flowing of the water but it iss nothing just falling of the water from a certain height and that adds beauty to the world and helps the water to get different parts of the world. The water that falls in the form of waterfalls are passed through different roads or stones and are generated by the melting of the glaciers and big ice cubes. These involve large volume of water just coming down at a high speed which makes the area to be slippery. These waterfalls are mostly natural and found all over the world, but now humans are developed so much that they are making their own waterfalls and one off the best example of this is the southwest Chinese city of Guiyang. There are some of the waterfalls that are existing naturally, on the other hand, there are some of the waterfalls that are made by the humans so that they can add more to the beauty of the world and also for fulfilling the demands of some areas. Therefore, they are proved to be the best of the manmade structure. Waterfalls are precious gifts of nature, which are always surrounded with greenery and other gifts of nature. This makes it so beautiful and that is why they are considered as popular place where tourists explore. Here we have mentioned some of the best waterfalls present in the world:

These waterfalls got originated from Iguazu River which resides on the borders of Argentine province of Misiones. In fact, this waterfall is considered as one of the largest waterfall in the world. The river falls through separated parts and thus causing 275 simultaneous falls. The longest fall is of 82 meters. The river rises from the city of Curitiba, but mainly flows through Brazil while giving waterfall credits to argentine province.

This waterfall is also called as Mosi-oa-Tunyameaning, which means the smoke that thunders. These falls are located on the Zambezi River in Sothern Africa, on the border of Zambia and Zimbabwe and it is considered one of the world’s largest waterfalls because of its width of 1708 meters. It has only two drops with a height of 108 meters at the center. These falls present a sight of beauty, which attracts most the tourists in its place and many come from far to visit these falls. This waterfall belongs to Kololo tribe, which resides near this place from 1800 century. More than 500 million cubic meters of water falls per minute nearly 100 meters below.

This waterfall resides in a group of three other waterfalls, which is present in the southern region of Niagara Gorge. This waterfall comes in between the state of New York in United States and province of Canada. The largest of three is Canadian falls, which is present along the border of both the countries. Along with these waterfalls, there are two other waterfalls named as Bridal Veil and American falls, these falls lies within the United States. The total height of the waterfalls is 51 meters. These together have the highest flow as compared to any other waterfalls in North America. These falls fulfill both the needs of electricity as well as beauty.

This waterfall lies on Potaro River, which is in the Kaieteur National Park, South America. This is the world’s largest single waterfall by volume of water flowing into it. It has a plunge over a sandstone cliff where it first breaks and then continues over series of other small waterfalls having total height of 251 meters.

Gocta also called as Catarata Del Gocta in Spanish and it is located in Peru’s province of Bongara in Amazons. It is continuously flowing waterfall over the whole year with two drops, attracting most of the tourists from all over the world. It is surrounded by tress and Amazon forest, which gives it the best beauty of nature. It was discovered by a German, who was named as Stefan Ziemendorff along with some other group of people. This waterfall can be seen from certain kilometers away and that is why it was named after the name of nearest town or settlement.

This is the waterfall located in Chile, South America. This giant waterfall was opened when a glacier was converted into ice due to global warming which was a manmade problem to the nature. This waterfall is taller in height and lies in the list of world’s most beautiful waterfall because it has a glacier above this fall and a rainbow is formed when sunlight touch it. The view of this is very beautiful and people just do not wait to see this fall because of the mountains above it. Its height is above 550 meters and one fall.

It is a waterfall in Nahanni National Park Reserve, Canada, which is in North America. This waterfall is located on the height of 500 meters and has a single drop and width of 259 meters, which is twice the height of Niagara Falls. It has a rock in between which is called “Mason’s rock”. This is considered to be a very powerful place to visit and because of its hard location and danger zone, this is only sighted by a few tourists which likely wish to go there.