A plan will be made for the multi-dimensional development of the tribal community of the state, expecting the Chief Minister to send a proposal.
Union Tribal Affairs Minister Arjun Munda and Chief Minister Pushkar Singh Dhami on Thursday presented Dr. B.R. Ambedkar ONGC Inaugurated the three-day Uttarakhand Tribal Festival organized at the stadium. He also visited the stalls of various products of tribal areas at the exhibition site in the Mahotsav premises. 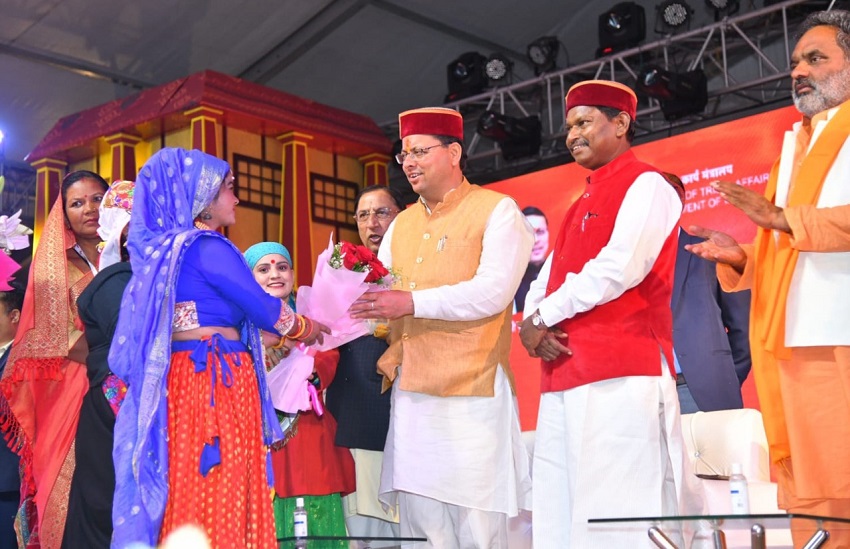 On this occasion, Union Minister Arjun Munda said that all the tribes have got a platform through the Uttarakhand Tribes Festival. The folk life, cultural heritage, folk and traditions of the tribes have also got vitality in this event. He said that along with Uttarakhand, the construction of Jharkhand and Chhattisgarh was done by the former Prime Minister Late. Atal Bihari Vajpayee did it. It is our responsibility to make our state move forward continuously in the direction of development. He appreciated the Chief Minister Pushkar Singh Dhami for the efforts being made by the Uttarakhand government for the development of the state as well as for the welfare of the tribes.

He said that Prime Minister Modi has done the work of giving respect to the tribal society in the country. In this sequence, it has been decided to organize the birth anniversary of Lord Birsa Munda as Gaurav Diwas.

He said that schemes would be made for the welfare of tribal areas and arrangements for education etc. in Uttarakhand, for which he expected the Chief Minister to send a proposal. He said that 450 schools would be opened for effective system of education in tribal areas in the country, for which a provision of 30 thousand crores has been made.

The Union Tribal Affairs Minister said that our effort is to connect the tribal community with the main stream of the country with the cooperation of the states. He also appreciated the arrangements made by Eklavya Schools and Tribal Research Institute in the state. He said that whatever proposals would be sent by the Chief Minister related to the development of tribal areas, decisions would be taken soon on them. He also stressed on making micro plans of tribal areas and linking them with livelihood mission programmes. He said that while there are 5 tribes in Uttarakhand, there are 32 tribal communities in Jharkhand.

On this occasion, Chief Minister Pushkar Singh Dhami asked Union Minister Arjun Munda to open two new Eklavya residential schools for tribal students in Pithoragarh and Chamoli border districts of the state, to provide tablets to 5000 students of tribes studying in departmental schools. , requested to set up a museum based on the biographies of freedom fighters in the state.

Chief Minister Pushkar Singh Dhami said that both his birthplace and work land have been related to tribal cultures. While he was attached to the Bhotia culture in remote Pithoragarh, there is also a deep relationship with the Tharu-Buxa tribe of Karmabhoomi Khatima. Today, there is a contemplation of global warming and environmental protection in the country, but our tribes have been paying special attention to environmental protection from the very beginning. Knowledge about herbs has been a special identity of our tribal groups since the beginning. During the Ramayana period, when Lord Rama was cutting off his fourteen years of exile, it was the forest dwellers who came forward to help Lord Rama. With his cooperation, Lord Rama defeated the huge army of Mahabali Ravana and conquered Lanka. There is a special mention about tribes even in the Mahabharata period.

The Chief Minister said that next November 15 is also the birth anniversary of Birsa Munda ji, who worked for the upliftment of the tribal society. It is the result of the work done by them that they hold special importance in the tribal group of Jharkhand. Many welfare works have been done for the tribals under the leadership of the successful Prime Minister of the country, Narendra Modi. It is the result of the Prime Minister’s thinking that he has done the work of connecting every section of the society with the main stream. Dozens of people working for the tribals in the country have been honored by the central government. Right now on this 9th November, the Central Government has awarded Padma to Mati Bhuri Bai ji and Tulsi Gowda ji of the tribal group.

The Chief Minister said that more than one handicraft products have been prepared by our tribal brothers, self-help groups in different stalls set up here. While on the one hand these products are eco friendly, their quality is also world class. It is all because of the leadership of the Prime Minister that we are promoting local products under the “Vocal for Local” campaign. Right now our government has also started “One District, Two Products” scheme. Under this we have listed two local products of every district.

He said that everyone is well aware of the valor and valor of the tribal groups in the military history of the country. Tribal group people have shown unprecedented performance in various positions in the country’s army. Referring to Veer Kesari Chand, the Chief Minister said that Kesari Chandra had made an important contribution to India’s independence by joining the Azad Hind Fauj of Netaji Subhas Chandra Bose during the Second World War. Similarly, he called for the establishment of a museum based on the biographies of the freedom fighters.